In 1803, Napoleon sold the Louisiana territory to the United States, and Anglo-Americans cast longing eyes on what they considered a vast undeveloped territory that extended west of the lands adquired through the Louisiana Purchase. Updated 1 year ago 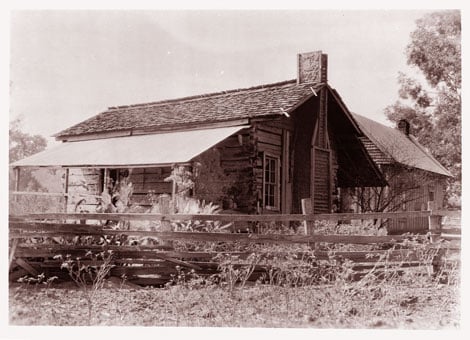 The Ybarbo Ranch House in Nacogdoches

The Ybarbo Ranch House in Nacogdoches was builit in 1774 by Antonio Gil Ybarbo as Spanish settlers moved in around the old missions.

Photo courtesy of Library of Congress.

In 1709, Fray Antonio de San Buenaventura y Olivares had made an initial request to establish a mission at San Pedro Springs (today’s San Antonio) to minister to the Coahuiltecans. Spanish officials denied the request. However, new fears over the French movement into East Texas changed that.

Another Franciscan, Father Francisco Hidalgo, who had earlier served at the missions in East Texas, returned to them when he and Father Antonio Margil de Jesús accompanied Capt. Diego Ramón on an expedition to the area in 1716. In that year, the mission of San Francisco de los Neches was established near the site of the old San Francisco de los Tejas mission. Nuestra Señora de Guadalupe was located at the present-day site of Nacogdoches, and Nuestra Señora de los Dolores was placed near present-day San Augustine.

The East Texas missions did little better on the second try, and supplying the frontier missions remained difficult. It became apparent that a way station between northern Mexico and East Texas was needed.

In 1718, Spanish officials consented to Fray Olivares’ request to found a mission at San Pedro Springs. That mission, called San Antonio de Valero, was later to be known as the Alamo. Because the Indians of the region often did not get along with each other, other missions were established to serve each group.

These missions flourished and each became an early ranching center. But the large herds of cattle and horses attracted trouble. The San Antonio missions began to face the wrath of the Apaches. The mission system, which attempted to convert the Indians to Christianity and to “civilize” them, was partially successful in subduing minor tribes but not larger tribes like the Apaches.

The Spanish realized that more stable colonization efforts must be made. Indians from Mexico, such as the Tlascalans who fought with Cortés against the Aztecs, were brought into Texas to serve as examples of “good” Indians for the wayward natives.

In 1731, Spanish colonists from the Canary Islands were brought to Texas and founded the Villa of San Fernando de Béxar, the first civil jurisdiction in the province and today’s San Antonio.

In the late 1730s, Spanish officials became concerned over the vulnerability of the large area between the Sierra Madre Oriental and the Gulf Coast in northern Mexico. The area was unsettled, a haven for runaway Indian slaves and marauders, and it was a wide-open pathway for the English or French to travel from the Gulf to the rich silver mines in Durango.

For seven years, the search for the right colonizer went on before José de Escandón was selected in 1746. A professional military man and successful administrator, Escandón earned a high reputation by subduing Indians in central Mexico. On receiving the assignment, he launched a broad land survey of the area running from the mountains to the Gulf and from the Río Pánuco in Tamaulipas, Mexico, to the Nueces River in Texas.

In 1747, he began placing colonists in settlements throughout the area. Tomás Sánchez received a land grant on the Rio Grande in 1755 from which Laredo developed. And other small Texas communities along the river sprang up as a result of Escandón’s well-executed plan. Many old Hispanic families in Texas hold title to their land based on grants in this period.

In the following decades, a few other Spanish colonists settled around the old missions and frontier forts. Antonio Gil Ybarbo led one group that settled Nacogdoches in the 1760s and 1770s.

The Demise of Spain

Spain’s final 60 years of control of the province of Texas were marked with a few successes and a multitude of failures, all of which could be attributed to a breakdown in the administrative system.

Charles III, the fourth of the Bourbon line of kings, took the Spanish throne in 1759. He launched a series of reforms in the New World. The king’s choice of administrators was excellent. In 1765, José de Gálvez was dispatched to New Spain (an area that then included all of modern Mexico and much of today’s American West) with instructions to improve both the economy and the defense of the area.

Gálvez initially toured parts of the vast region, gaining first-hand insight into the practical problems of the colony. There were many that could be traced to Spain’s basic concepts of colonial government. Texas, in particular, suffered from the mercantilist economic system that attempted to funnel all colonial trade through ports in Mexico.

But administrative reforms by Gálvez and his nephew, Bernardo Gálvez, namesake of Galveston, were to be followed by ill-advised policies by successors.

Problems with the Comanches, Apaches and “Norteños,” as the Spanish called some tribes, continued to plague the province, too.

About the same time, Spain undertook the administration of the Louisiana Territory. One of the terms of the cession by France was that the region would enjoy certain trading privileges denied to other Spanish dependencies. So although Texas and Louisiana were neighbors, trade between the two provinces was banned.

The Spanish crown further complicated matters by placing the administration of Louisiana under authorities in Cuba, while Texas remained under the authorities in Mexico City.

The death of Charles III in 1788 and the beginning of the French Revolution a year later weakened Spain’s hold on the New World dominions. Charles IV was not as good a sovereign as his predecessor, and his choice of ministers was poor. The quality of frontier administrators declined, and relations with Indians soured further.

Charles IV’s major blunder, however, was to side with French royalty during the revolution, earning Spain the enmity of Napoleon Bonaparte. Spain also allied with England in an effort to thwart Napoleon, and in this losing cause, the Spanish were forced to cede Louisiana back to France.

In 1803, Napoleon broke a promise to retain the territory and sold it to the United States. Spain’s problems in the New World thereby took on an altogether different dimension. Now, Anglo-Americans cast longing eyes on the vast undeveloped territory of Texas.

With certain exceptions for loyalists who left the American colonies during the revolution, Spain had maintained a strict prohibition against Anglo or other non-Spanish settlers in their New World territories. But they were unprepared to police the eastern border of Texas after removing the presidios in the 1760s. What had been a provincial line became virtually overnight an international boundary, and an ill-defined one at that.