Some of the most famous Texans in history had Scotch-Irish heritage. Updated 1 year ago 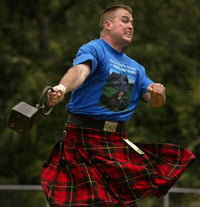 A man competes in the hammer throw during the Texas Scottish Festival and Highland Games in Arlington. Photo by Andy Scott.

Sam Houston. You can start there when naming the Texans with ancestors from Scotland.

Even Chief Bowles, the revered Texas Cherokee leader killed at the Battle of the Neches in 1839, was of mixed Scot and Indian heritage. The chief was described as "decidedly Gaelic in appearance, having light eyes, red hair and somewhat freckled."

Most of these figures would mention "Scotch-Irish" as a distinction, but, just the same, the Celtic blood line goes back to the land of plaid kilts and "Mc" clans.

Scotch-Irish are those Scots who moved to Northern Ireland in the 1600s and moved on to other lands in the 1700s when they would not succumb to the "Anglican ascendancy" or mix with "papish Catholics" in Ireland. More than 250,000 of these Scotch-Irish emigrated to the American colonies between 1717 and the American Revolutionary War. These Presbyterian "Scotch-Irish" were the majority of settlers who first moved over the Appalachians. Men such as Daniel Boone. And they kept moving. To Kentucky. To Tennessee. To Missouri. And, eventually into Texas.

During their continual migration, their formal religious ties dissolved into the individualistic, churchless American milieu of the early 1800s, and many would be born-again as Baptists or converted by the Methodist itinerant preachers of the frontier.

These are the Scotch-Irish whose numbers get mixed up with ambiguous references to "British" colonists, and "Irish" ancestors, and "Anglo-American" settlers.

Later, especially when ranching came to define Texas in the late 1800s, eager and ambitious Scots came directly from Edinburgh and Aberdeen to raise cattle and build railroads – and make money.

In the same 1990 census, the massive impact of Americans of Scotch-Irish descent continued to be obscured. The census found that Southerners comprise one third of the 39 million Americans identifying "Irish" ancestors. And, then there were the 1.1 million of "British" ancestry. These broad labels probably conceal many Scottish ancestors. This Southern stock is the core group of "Anglo-American" Texans.

Rarely coming or settling in groups, 100-proof Scot-Texans have begun to celebrate their ethnic heritage only in the last part of the 20th century with annual "highland games" and festivals in various parts of the state.

The Scottish festivals involve not only athletic competition but also feature music, especially piping and drumming, as well as dance and food.

The longest running and probably best-known include the Scottish Games in Salado. The annual fete, sponsored by the Central Texas Area Museum, is held in November.

The Texas Scottish Festival and Highland Games at the University of Texas in Arlington are held each year in early June.

The Mo-Ranch Day of the Scots in Hunt is in September.

The Institute of Texan Cultures' annual Folklife Festival in San Antonio includes the Scottish legacy in its August celebrations.

— written by Robert Plocheck, associate editor, for the Texas Almanac 1998–1999.