Texas has produced and propelled many Olympic Medalists since 1920. Updated 2 months ago 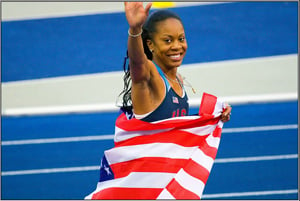 Sanya Richards-Ross graduated from the University of Texas at Austin. Photo by Andre Zehetbauer (CC-BY-SA).

This is a list of athletes with Texas connections who have won medals in Olympic Games including 2018. This includes those born here or have lived in Texas, as well as athletes who spent their collegiate careers at Texas universities.

Information included is: the athlete's name, the sport and the year, as well as the types of medals (G-Gold, S-Silver, B-Bronze). If the athlete won more than one of the same kind of medal in any one year, the number is noted before the letter code; i.e., 2G indicates that the athlete won two gold medals in the games indicated.

Track indicates all track and field events except those noted separately.

• In January 2013, the International Olympic Committee disqualified Lance Armstrong from the 2000 events he competed in after he was found to have used drugs to enhance his performance.