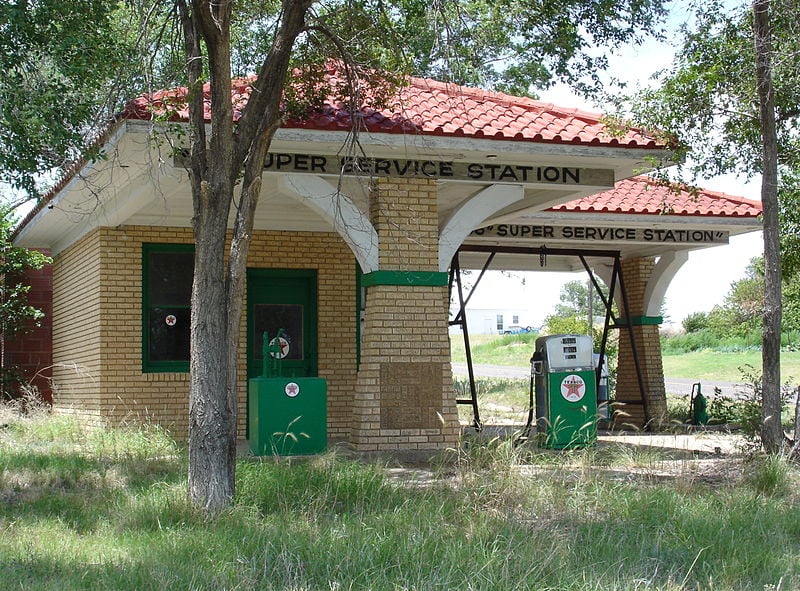 You can visit this restored 66 Super Service Station in Alanreed, but don't expect to get any gas. Photo by CTLiotta (Public Domain)

Alanreed is on Interstate Highway 40 and U.S. Highway 66 in southern Gray County. In the early 1880s a group of farmers clearing timber from the basin of McClellan Creek selected the site, which was on the stage line from Mobeetie to Clarendon. By 1884 the Clarendon Land and Cattle Company began selling townsite lots. F. R. McCraken and R. P. Reeves were among the first settlers. In 1886 a post office called Eldridge was established six miles north of the present site of Alanreed. At various times the town was also called Springtown or Spring Tank, for a large spring-fed tank; Prairie Dog Town, for one located nearby; and Gouge Eye, for a saloon fight. The present townsite was laid out in 1900 by a surveyor for the Choctaw, Oklahoma and Texas Railroad. The town's present name was reputedly derived from the name of the contracting firm, Alan and Reed.

Alanreed is part of or belongs to the following places.

Alanreed is classified as a Town

Photos of Alanreed and surrounding areas

You can visit this restored 66 Super Service Station in Alanreed, but don't expect to get any gas. Photo by CTLiotta (Public Domain)