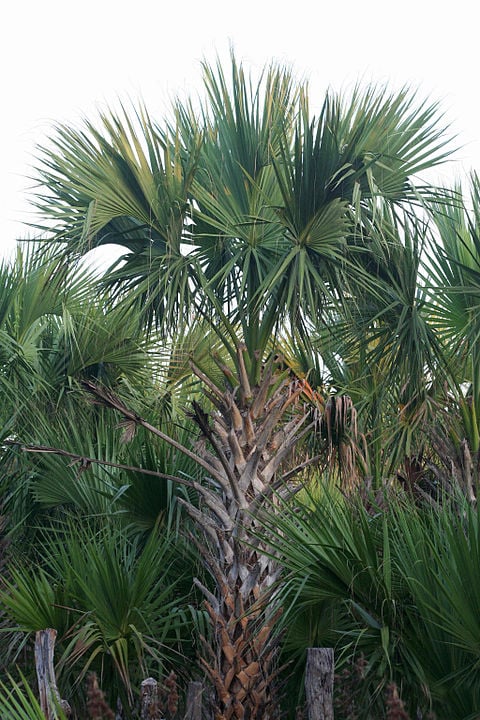 A Sabal Mexicana, a Texas sabal palm which is a native plant species of the City of Brownsville, the seat of Cameron County, Texas. Image Credit: Whitney Cranshaw.

Brownsville, the county seat of Cameron County, is across the Rio Grande from Matamoros, Tamaulipas, at the southernmost tip of Texas. The city is at the southern terminus of U.S. highways 77 and 83 and the Missouri Pacific and Southern Pacific railroads, as well as a major port of entry to Mexico. Although the site was explored as early as the seventeenth century, the first settlers did not arrive until the latter part of the eighteenth century. In 1765 the community of San Juan de los Esteros (present-day Matamoros) was established across the Rio Grande. In 1781 Spanish authorities granted fifty-nine leagues of land on the northern bank of the river, including all of the site of Brownsville, to José Salvador de la Garza, who established a ranch about sixteen miles northwest of the site. During the early nineteenth century a small number of squatters, most of them herders and farmers from Matamoros, built huts in the area. A small settlement had formed by 1836, when Texas declared her independence from Mexico, but the region was still only sparsely settled when United States troops under Gen. Zachary Taylor arrived in early 1846. After taking up a position across from Matamoros, Taylor's forces began the construction of a defensive position near the settlement. Their temporary fort was originally called Fort Texas, but was renamed Fort Brown a short time later, in honor of Maj. Jacob Brown, who died during a Mexican attack on the stronghold. After the Mexican War, at the signing of the Treaty of Guadalupe Hidalgo in 1848, the area became part of the state of Texas and fell within the jurisdiction of San Patricio County. The same year Charles Stillman purchased a large part of the Garza grant north and northwest of Matamoros, including part of the city's common landholdings, from the children of the first wife of José Narciso Cavazos. Cavazos had remarried, however, and the heirs of his second wife, led by the eldest son, Juan N. Cortina, had been given legal title to the property, a fact that later led to a long series of legal battles over ownership. Stillman and his partner, Samuel Belden, laid out a town that they called Brownsville. George Lyons, deputy surveyor of Nueces County, surveyed a townsite of 4,676 acres. In December 1848, Stillman, Belden, and Simon Mussina formed the Brownsville Town Company and began selling lots for as much as $1,500 each.

Brownsville at a Glance

Brownsville is part of or belongs to the following places.

Brownsville is classified as a Town

Photos of Brownsville and surrounding areas

A Sabal Mexicana, a Texas sabal palm which is a native plant species of the City of Brownsville, the seat of Cameron County, Texas. Image Credit: Whitney Cranshaw.

Brownsville by the Numbers