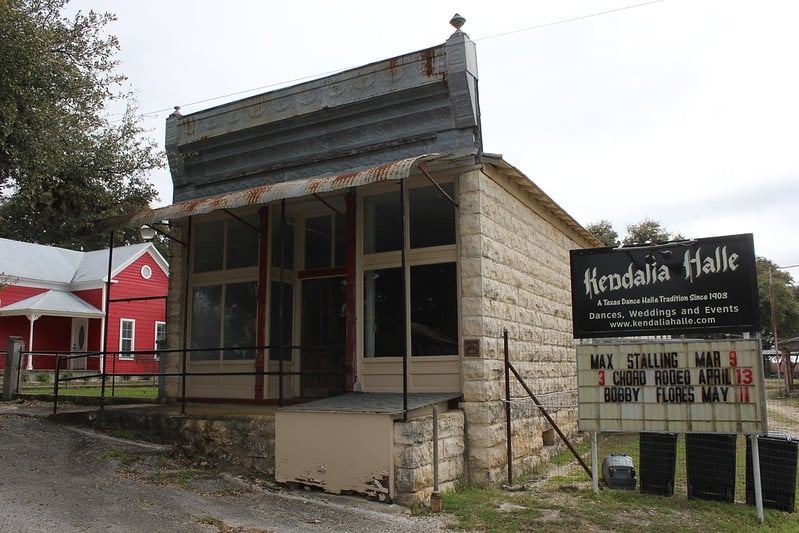 Kendalia is on Farm Road 473 twenty-five miles northeast of Boerne in east Kendall County. The community was probably named for George Wilkins Kendall, who established a ranch and introduced sheep ranching in the area in the 1840s. Although there were some settlers in the vicinity and in the nearby Curry's Creek settlement before the 1880s, Kendalia was first surveyed by D. W. Grady in 1883 for early settler Carl Gustav Vogel, who built a gin and gristmill at the town. In 1895 the post office records were transferred from Curry's Creek to Kendalia. Around the beginning of the twentieth century Kendalia had a general store, a post office, a drugstore, and two churches. Over the following years three schools served Kendalia. The community had several family cemeteries, including those of the Edge, Jones, Lawhon, and Schmidt families. Throughout most of the twentieth century Kendalia had a ranching economy that subsisted in various cattle, goat, and sheep ranches in the area. In 1940 the population was about 100. Kendalia was associated with nearby Edge Falls on Curry Creek, a popular recreational spot, until the 1970s, when the falls were closed to the public. In the 1980s through 2000 Kendalia had a population of seventy-six. Many residents worked in San Antonio or Blanco. In 2000 the town had a general store and post office, a community center, a library, and a Methodist church.

Kendalia at a Glance

Kendalia is part of or belongs to the following places.

Kendalia is classified as a Town

Photos of Kendalia and surrounding areas

Kendalia by the Numbers