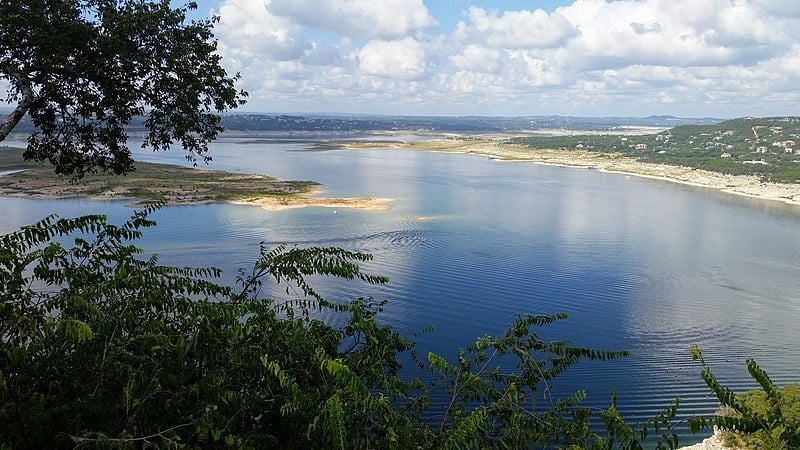 A View of Lake Travis

Lake Travis is a popular weekend destination. Photo by Beckybot, CC by SA 4.0

Lake Travis is a sixty-five-mile-long artificial lake on the Colorado River in southern Burnet and western Travis counties (its center point is 30°25' N, 98°00' W). In December 1936 the United States Department of the Interior authorized the Lower Colorado River Authority to construct a low dam at the site of an old crossing on the river known as Marshall Ford. Work began on Marshall Ford Dam in February 1937 and was scheduled for completion by December 1939. However, after disastrous flooding in July 1938 it was decided to extend the height of the dam from 200 feet to 278 feet. This delayed completion of the project until 1942. The finished Mansfield Dam, renamed in 1941 for United States Representative Joseph J. Mansfield is a 7,089-foot-long concrete, earth, and rockfill structure. The cost of the project was $28,709,948. The capacity of Lake Travis is approximately 1,920,000 acre-feet, of which 778,000 acre-feet is reserved for flood control; the surface area of the lake is approximately 19,300 acres. The power installation consists of three turbines with a combined generating capacity of 108 megawatts, each with all the allied equipment for connecting to the transmission system. The drainage area above the dam is 38,130 square miles, of which 11,900 is probably noncontributing. Runoff is partly regulated by Lake Buchanan and other reservoirs upstream. The lake has become a major resort area that provides opportunities for boating, fishing, swimming, and camping.

Lake Travis at a Glance

Lake Travis is part of or belongs to the following places.

Lake Travis is classified as a Lake

A View of Lake Travis

Lake Travis is a popular weekend destination. Photo by Beckybot, CC by SA 4.0