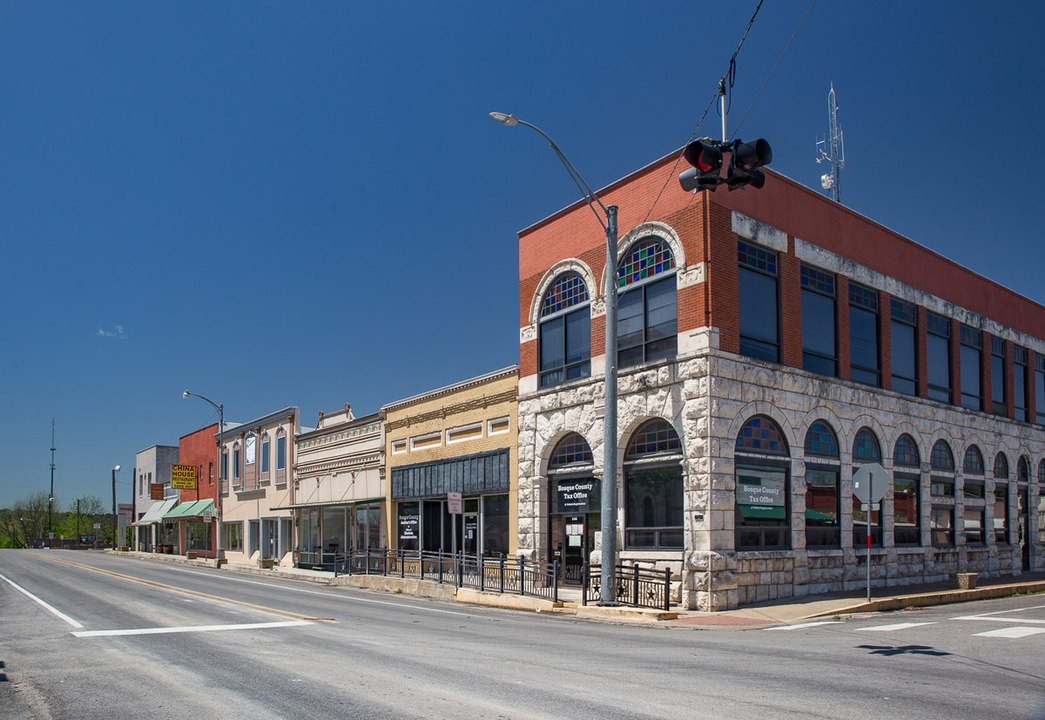 View of downtown Meridian, the seat of Bosque County, Texas. Photograph by Renelibrary.

Meridian, the county seat of Bosque County, is on the North Bosque River, the Santa Fe rail line, and State highways 6, 22, 144, and 174, forty-seven miles northwest of Waco near the center of the county. The community originated in 1854, when the legislature established Bosque County and appointed six commissioners to choose a centrally located site for the county seat. When a proposed donation of 100 acres from Dr. Josephus M. Steiner and twenty acres from Andrew Montgomery met the location requirement, the commission accepted the land and hired George B. Erath to survey a townsite. The origin of the community's name is somewhat obscure. Commissioner Jasper N. Mabray proposed the name, which according to legend recognized both Meridian Creek and Meridian Knobs, previously named by Erath for their proximity to the ninety-eighth meridian. The ninety-eighth meridian, however, passes through only a tiny portion of the northwestern corner of Bosque County; nonetheless, the most likely explanation is that the commissioners believed their town lay near a meridian. Growth proceeded slowly after the town-lot sale of July 4, 1854. By fall William McCurry had built a one-room log courthouse; a series of buildings replaced it over the years. A tavern opened before the end of 1854. Postmaster Joseph W. Smith established the first county post office in Meridian in 1856. A general variety store opened at the community in 1861. All the pre-Civil War businesses appear to have been housed in log structures. The Bosque Beacon, the town's first newspaper, was published from 1866 to 1868, and the town has been served almost constantly by newspapers ever since. Meridian appears to have boomed during the 1880s. The Santa Fe line crossed Bosque County in 1881, passing 1½ miles east of Meridian. Before the advent of rail transportation, the town had been on a state route between Waco and Stephenville. Speculators divided the area around the new depot into town lots, anticipating that the new site would become the county seat. A cotton gin and a store did open in East Meridian, but the core of the town remained at the original site. Despite the inconvenience of the railroad's location, the older town prospered as a shipping center for surrounding farms. The Bosque County Bank opened in 1884 and became the First National in 1889; this institution merged with a rival Farmers State Bank about 1927, and in 1969 the bank was again named the Bosque County Bank. By 1888 the town had a business district organized around the town square. That year also saw a change in municipal government when the town, which had incorporated in 1874, implemented a mayor-council form of city government. In 1886 Meridian citizens voted to establish their own school district; before then children had been educated by the county. Meridian College opened in 1909 and operated as a junior college from 1913 until 1927.

Meridian at a Glance

Meridian is part of or belongs to the following places.

Adoption Status: ⭐
This place has been adopted and will not be available until January 11, 2024
Adopted by:
Don and Sylvia Hartless
Dedication Message:
Our place on the North Bosque River near Meridian is our own little piece of Heaven, a lovely respite from the rat race in the Metroplex.

Meridian is classified as a Town

Photos of Meridian and surrounding areas

View of downtown Meridian, the seat of Bosque County, Texas. Photograph by Renelibrary.

Meridian by the Numbers