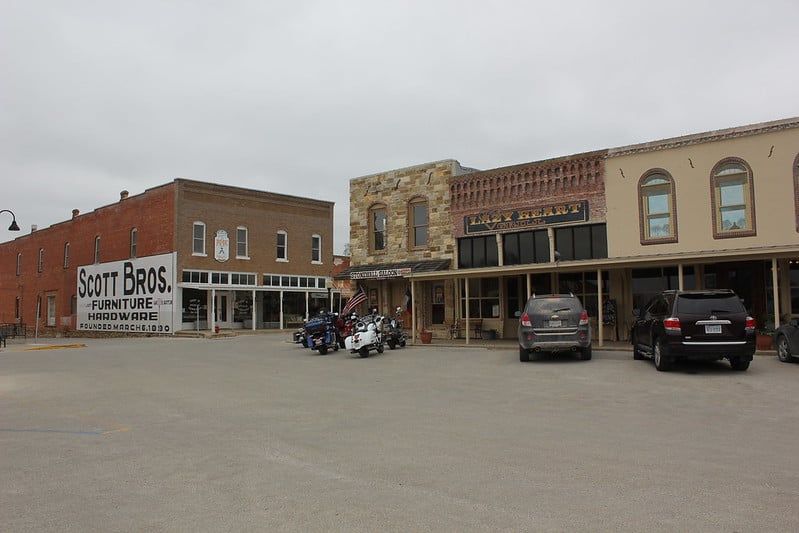 Saint Jo is at the intersection of U.S. Highway 82 and State Highway 59, near the Cooke county line fifteen miles east of Montague in extreme east central Montague County. It was founded in 1849 by Ithane and Prince Singletary, whose fruitless search for gold in the area encouraged them to relocate to Whitesboro. About 1851, however, the Singletarys returned to their original settlement, calling their home Head of Elm, after its location near the headwaters of the Elm Fork of the Trinity River. This location received considerable use by various United States Army expeditions. Capt. Randolph B. Marcy camped in the area in 1849 with a surveying crew. Five years later, Capt. John Pope and his crew camped at Head of Elm as they surveyed the area for a proposed federally sponsored railroad across the region from Arkansas. In 1855 Col. Albert Sydney Johnston camped there en route to west Texas. By 1870 the community was considered for the location of the county seat but lost out to more centrally located Montague in 1858. Cattle drives on the Chisholm Trail likely spurred Head of Elm's growth. By 1871 seven business establishments, five of them grocery stores, operated locally. In 1872 a group of local promoters, led by Irb H. Boggess and Joseph A. Howell, purchased a 640-acre tract that included the Head of Elm settlement. The following year they surveyed and laid out a townsite on this property. The community's present name was reportedly suggested by Boggess as a reference to the abstemious Howell. A post office, operating under the name Saint Jo, opened in 1873, when the community had a number of houses, a general merchandise store, and two saloons. Saint Jo grew rapidly after 1873, achieving a population of 500 by 1886, when it incorporated. The community then had two steam-powered cotton gins, a number of gristmills, and a weekly newspaper. During that same year the Gainesville, Henrietta, and Western Railway extended tracks through the town. By 1890 Saint Jo had a population of 1,000; by 1900 it had fallen to 825. Through most of the twentieth century Saint Jo experienced steady growth. Its population rose to 985 by the mid-1920s; ten years later the town had fifty-five rated businesses. In 1926 oil was discovered just across the county line in Cooke County, and local hay and asphalt production prospered. By the late 1940s Saint Jo had 1,010 persons and forty-eight businesses. Its population increased to 1,147 ten years later, and then declined somewhat, reaching 1,067 during the late 1960s. The number of businesses in 1957 was thirty-nine. In the mid-1970s the town had a population of 1,105 and twenty-seven businesses. In 1989 it had 1,717 people and twenty-four businesses. In 1990 the population was 1,048. The population dropped to 977 in 2000.

Saint Jo at a Glance

Saint Jo is part of or belongs to the following places.

Saint Jo is classified as a Town

Saint Jo by the Numbers