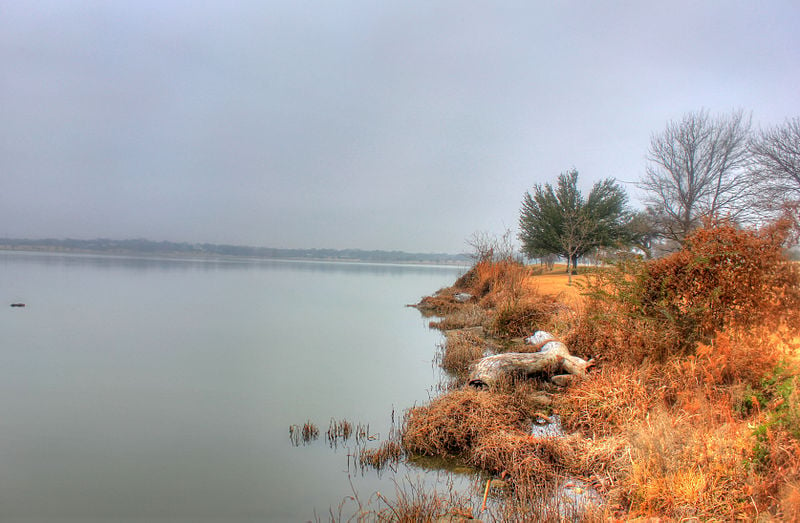 White Rock Lake is on White Rock Creek five miles northeast of downtown Dallas in central Dallas County (at 32°49' N, 96°44' W). The lake is northeast of State Highway 12, east of the Southern Pacific Railroad, and northwest of State Highway 78. White Rock Lake Park surrounds the entire lake. White Rock Lake is owned and operated by the city of Dallas to supply a small part of the city's municipal water needs, and to supply water for condenser cooling at a steam-electric generating plant. The reservoir had an original capacity of 18,160 acre-feet and a surface area of 1,254 acres at spillway crest elevation of 458.1 feet above mean sea level. Construction on White Rock Lake began in 1910 in response to a water shortage in Dallas. After the lake was completed in 1911, residential construction around the lake increased, and in the early 1930s the Dallas Park Board, with the help of the Civilian Conservation Corps, began developing the lakeshores into a municipal park. In 1943 the government used the barracks at Winfrey Point to house German prisoners of war who had served in Rommel's Afrika Corps. In 1992 White Rock Lake Park was a center of recreational activity for central Dallas, providing picnic areas and bicycle and jogging paths.

White Rock Lake at a Glance

White Rock Lake is part of or belongs to the following places.

White Rock Lake is classified as a Lake