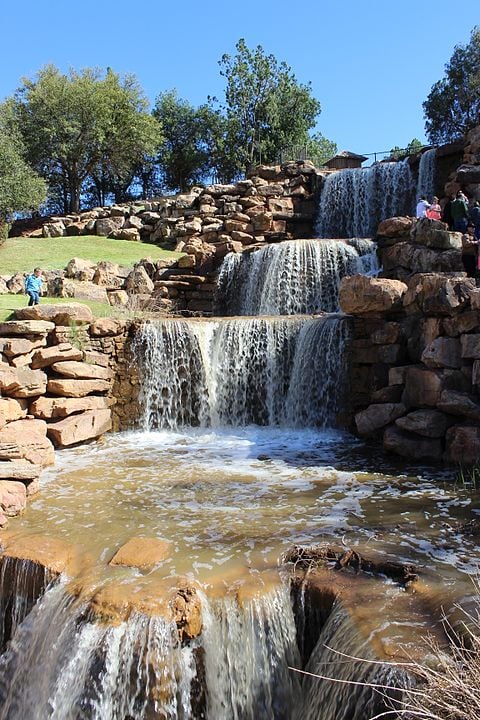 Reproduction of the falls at Wichita Falls, Texas, the seat of Wichita County. Photograph by Travis K. Witt.

According to tradition, the land where the city of Wichita Falls is presently located, in southeast Wichita County, was acquired in a poker game by John A. Scott of Mississippi in 1837. In fact, Scott acquired the tract by purchasing Texas land certificates, which he packed away and promptly forgot. Years later the certificates were rediscovered by Scott's heirs, who commissioned M. W. Seeley to map out a townsite on the tract on the Wichita River. As platted by Seeley in July 1876, the townsite included the location of a small waterfall on the Wichita River that was later washed away, several named streets, and a town square. In a fanciful drawing that accompanied the plat, Seeley also included an imaginary lake, a steamboat on the river, and warehouses laden with cotton and other goods. The town never became a steamboat shipping center, although railroads were very important to its later development. At the time of Seeley's plat there were already a few settlers living in the area. Tom Buntin and his family had been there since the 1860s, making their living hauling buffalo hides, and John Wheeler settled there in 1875, as did John Converse, who built the first store. Seeley himself built a small house at a site now at the corner of Sixth and Ohio streets, and Alexander Craig built a cabin nearby. All of these early settlers eventually moved on. The first permanent settlers were the Barwise family of Dallas. They first came to the townsite on an exploring trip in 1878 and returned to stay the following year. Barwise purchased the Craig cabin and two lots for $105.00. Schooling for the Barwise children was provided by M. W. Seeley's daughter, Hattie Seeley, in her home, where Alexander C. Garrett also conducted Episcopal Church services. A post office was established in 1879; Charles G. Converse was the first postmaster. The first public school opened in the fall of 1880 and the first church, First Methodist, was formally organized in 1881. By that time, according to various reports, there were between eight and thirteen families living at the townsite.

Wichita Falls at a Glance

Wichita Falls is part of or belongs to the following places.

Adoption Status: ⭐
This place has been adopted and will not be available until December 26, 2022
Adopted by:
Christine Stephenson Forrest
Dedication Message:
In honor of Tania Stephenson

Wichita Falls is classified as a Town

Reproduction of the falls at Wichita Falls, Texas, the seat of Wichita County. Photograph by Travis K. Witt.

Wichita Falls by the Numbers