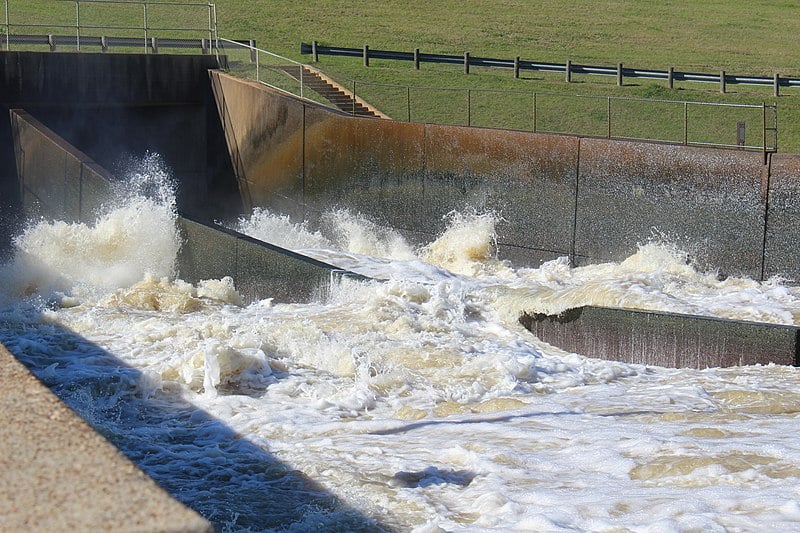 The Spillway at Lake Wright Patman

Lake Wright Patman's spillway was opened to control floodwaters in 2016. Photo by Griffinstorm, CC By SA 4.0

Wright Patman Lake is on the Sulphur River eleven miles southwest of Texarkana in Bowie and Cass counties (at 33°18' N, 94°10' W). It also extends into Morris, Titus, and Red River counties. The project was originally known as Texarkana Reservoir but was renamed for Wright Patman in the late 1970s in honor of the longtime congressman from East Texas. The lake is owned by the United States government and has been operated by the United States Army Corps of Engineers, Fort Worth District, for flood-control, conservation, and recreational purposes since the 1980s. The cities of Texarkana, Texas, and Texarkana, Arkansas, are authorized to divert 14,572 acre-feet annually for municipal use. Construction on the dam began in September 1948 and was completed in December 1957 at a cost of $34,200,000. The reservoir was used for temporary floodwater detention from July 2, 1953, to June 27, 1956, when deliberate impoundment began. It has a capacity of 142,700 acre-feet and a surface area of 20,300 acres at the conservation storage elevation of 220 feet above mean sea level; it has a 2,654,300 acre-foot capacity at the spillway crest elevation of 259.5 feet. This provides a flood-control storage capacity of 2,509,000 acre-feet between the two elevations. The drainage area above the dam is 3,443 square miles. The surrounding low-rolling to flat terrain is surfaced by shallow to deep clay and sandy loams that support mixed hardwoods and pines and grasses.

Wright Patman Lake at a Glance

Wright Patman Lake is part of or belongs to the following places.

Wright Patman Lake is classified as a Lake

The Spillway at Lake Wright Patman

Lake Wright Patman's spillway was opened to control floodwaters in 2016. Photo by Griffinstorm, CC By SA 4.0