Cajun heritage and identity has historic roots in Texas and has shaped the state for centuries. Updated 11 months ago

The southeastern counties of Texas have a concentration of Cajuns.

The U.S. census bureau does not provide a list on its long form in which respondents check off a selection such as “Cajun.”

Instead, the form merely asks, “What is the person’s ancestry or ethnic origin?” In 1990 and 2000, a few examples were provided (including French-Canadian on both).

The result of this procedure was that in 2000 in Lafayette Parish in Louisiana, which is called the Capital of Cajun Country, the census estimate was only 5,145 persons of Cajun origin in a civil parish of more than 190,000 people.

In fact, thoughout the nation in 2000, census respondents were significantly less likely to put an ancestral origin, and the number who simply replied “American” increased by 62 percent from 1990.

Thus, the figures that more closely reflect the ethnic origins are probably the 1990 census estimates, which would be, for Lafayette, 83.8 percent of the population with some French background, many being Cajun.

Applied to Texas counties, this means Orange County has about a third of its population of some French origin, either single origin, primary or secondary. (Each census repondent may enter as many as two ethnic origins.)

Jefferson County (Beaumont-Port Arthur) and Chambers County (Anahuac-Winnie) have over one-quarter of their populations of French origin. That compares to a Texas statewide average of 5.7 percent with some French origin.

Of course, not all with French ancestry are Cajun. But, if even half are, that figure would be nearer a 1980 estimate by Canadian ethnographers of 375,000 Texas Cajuns.

The map above shows the counties, all in the southeastern corner of the state, that according to the 1990 census, have more than 10 percent of their populations of French ancestry, probably the majority of whom are Cajun or Creole.

Note in the chart below that Houston has more Cajuns than New Orleans, which, although it has many French Creoles, is not a Cajun city. – RP

The southeastern counties of Texas have a concentration of Cajuns. 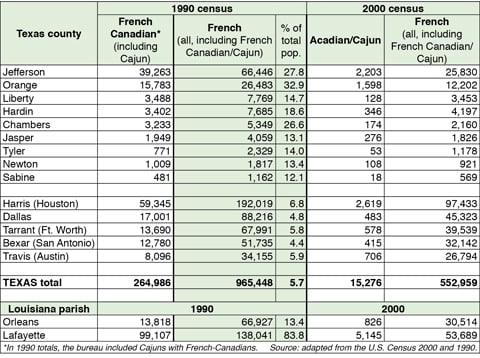