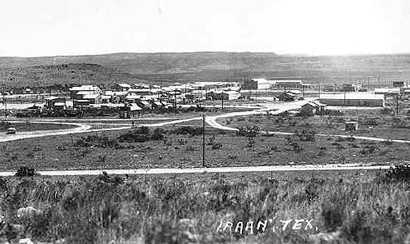 Iraan is at the intersection of U.S. Highway 190 and State Highway 349, near the Pecos River sixteen miles northwest of Sheffield in eastern Pecos County. It came into existence after the discovery of oil on the nearby Ira G. Yates ranch in 1926 (see YATES OILFIELD). Iraan was named for Ira and Ann Yates in a contest that offered a town lot as a prize. Tents, shacks, and bunkhouses were initially the only housing available, as oil companies rushed to move workers and their families to the boomtown. The Ohio Oil Company built company houses, drilled water wells, and in 1927 hired teachers and provided a school. A post office was established in 1928. By 1930 Iraan had sixty rated businesses and an estimated population of 1,600. In the 1930s V. T. Hamlin, a local newspaper man, began the "Alley Oop" comic strip, which was nationally syndicated by the Newspaper Enterprises Association. A park named for the cartoon character was dedicated in Iraan in 1965. The population of Iraan dropped to 951 by 1967, when declining oil production forced several major oil companies to move their offices from the community. In 1986, after the temporary rally in the oil business in the 1970s and early 1980s, Iraan had twenty-five businesses and a population of 1,358. In 1990 the population was 1,322, and in 2000 the population was 1,238.

Iraan at a Glance

Iraan is part of or belongs to the following places.

Iraan is classified as a Town

Photos of Iraan and surrounding areas

Iraan by the Numbers