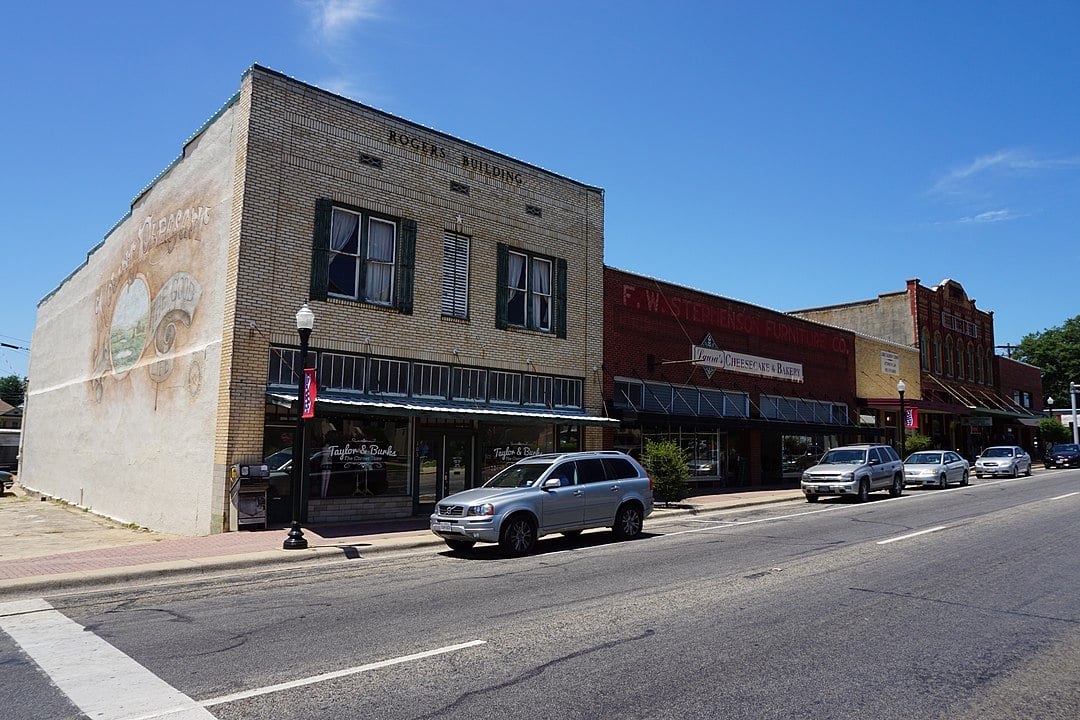 The seat of Titus County is Mount Pleasant. Photograph by Michael Barera.

Mount Pleasant, county seat of Titus County, is located sixty-one miles southwest of Texarkana at the junction of Interstate 30, U.S. Highway 271, and State Highway 49, in the south central part of the county. The town was founded, incorporated, and designated the county seat when the county was formed in 1846. The townsite was given by John Binion, Sr., Burrell Moore, Richard Moore, and L. Gilbert, early settlers. A post office was established in 1847, but the town remained small until the completion of the Texas and St. Louis Railway in the early 1880s. By 1885 Mount Pleasant had a bank, three churches, steam flour mills and cotton gins, a weekly newspaper, and a population of 800. From 1908 to 1915 the town was known as a resort because of red mineral springs nearby. The population continued to grow during the early twentieth century and exceeded 4,000 for first time in the mid-1920s. During the early 1930s, due to the effects of the Great Depression, the population declined to about 3,500; the number of businesses fell from some 190 to 121 by 1936. Afterward Mount Pleasant grew steadily. The town serves as a retail center not only for Titus, but adjoining Franklin, Camp, and Morris counties. In 1952 the reported population was 6,348; in 1970 it was 11,021. Important industries included poultry processing, meat packing, garment manufacturing, oil refining, lumber processing, and feed milling. Between 1956 and 1966 the town completed Lake Tankersley, three school buildings, a post office building, and additions to the water and sewer systems. In 1966 Mount Pleasant had thirty-one churches, three hospitals, two banks, a library, two newspapers, three nursing homes, and a radio station. The population was 12,291 in 1990. The number of businesses declined from 324 to 298 between 1970 and 1990. In the early 1990s Mount Pleasant was a commercial center for farming, livestock, and oil. Northeast Texas Community College, which serves a three-county area (Camp, Morris, and Titus) is located there. Important industries also include tourism from visitors to three large reservoirs nearby. In 2000 the population grew to 13,935.

Mount Pleasant at a Glance

Mount Pleasant is part of or belongs to the following places.

Mount Pleasant is classified as a Town

The seat of Titus County is Mount Pleasant. Photograph by Michael Barera.

Mount Pleasant by the Numbers