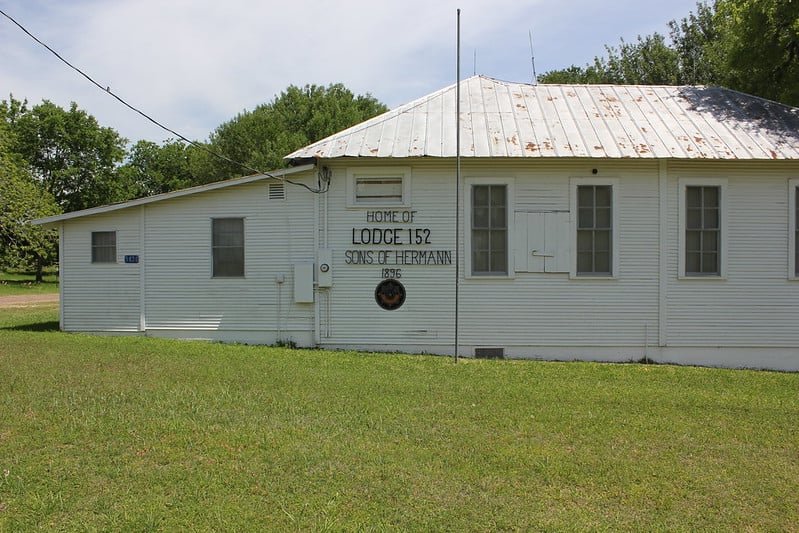 The Sons of Hermann Lodge in Rutersville

Rutersville is on State Highway 159 five miles east of La Grange in central Fayette County. It was founded by John Rabb and other members of the Methodist Episcopal Church for the purpose of establishing a college. The site on the La Bahía Road was surveyed in 1838 and incorporated by the Republic of Texas on January 26, 1839. On July 1, 1839, the purchase of the Franklin Lewis league was concluded. The purchasers donated seventy-six acres to the college and named the community and the college for Rev. Martin Ruter, a pioneer Methodist preacher who had proposed the enterprise but died before it became a reality. The college was chartered in 1840 by the Republic of Texas to serve all faiths, with university privileges. A classical course was organized, but most students entered the preparatory and female departments. In 1856, by an act of Congress, Rutersville College was consolidated with the Texas Military Institute of Galveston and the Monumental Committee of La Grange. The act also provided for the establishment of Rutersville Female College under the same management. At the outbreak of the Civil War many of the students of the military institute joined the army, and the institution closed. Rutersville hosted the first Methodist conference of the Texas districts on December 25, 1840, as well as annual Methodist camp meetings throughout the 1840s and 1850s. The Rutersville congregation had 167 members in 1847 but the town declined as a Methodist stronghold when the college passed out of its control in 1856. The Methodist Church redesignated the Rutersville District as the La Grange District. During the later nineteenth century Rutersville became a German Lutheran settlement. In 1872 the First German Evangelical Lutheran Synod of Texas chose Rutersville as the location for a college, primarily because of the availability of the old college buildings. In 1873 the institution opened as a German-English elementary school, a free public school. The attempt to develop a college and seminary was not successful, so the property was sold in 1881 to a real estate company.

Rutersville is part of or belongs to the following places.

Rutersville is classified as a Town

Photos of Rutersville and surrounding areas

The Sons of Hermann Lodge in Rutersville