The principal crops produced in Texas range from cotton, Sorghum, Rice, Wheat, Corn, Hay, Silage, and many other crops. Updated 9 months ago 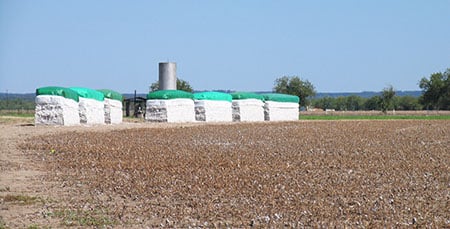 Cotton is the raw material for processing operations at gins, oil mills, compresses, and a small number of textile mills in Texas. Cotton in Texas is machine harvested. Field storage of harvested seed cotton has become common practice as gins decline in number. Most of the Texas cotton crop is exported. China, Turkey, Mexico, and various Pacific Rim countries are major buyers. With the continuing development of fiber-spinning technology and the improved quality of Texas cotton, the export demand for Texas cotton has grown. Spinning techniques can efficiently produce high-quality yarn from relatively strong, short or longer staple upland cotton with fine mature fiber.

The value of Texas grain sorghum in 2018 was second highest in the nation, behind Kansas. Much of the grain is exported or used in livestock and poultry feed throughout the state. Recently, Texas sorghum has also seen demand in ethanol production.

Although grown to some extent in all counties where crops are important, the largest concentrations are in the High Plains, Coastal Bend, and Lower Rio Grande Valley areas. Research to develop high-yielding hybrids resistant to diseases and insect damage continues.

Rice, which is grown in about 20 counties on the Coastal Prairie of Texas, ranked third in value among Texas crops for a number of years. However, in 2018, cotton, hay, corn, wheat, and grain sorghum outranked rice. Rice farms are highly mechanized, producing rice through irrigation and using airplanes for much of the planting, fertilizing, and application of insecticides and herbicides.

Texas farmers grow long- and medium-grain rice only. The Texas rice industry, which grew from 110 acres in 1850 to a high of 642,000 planted acres in 1954, has been marked by significant yield increases and improved varieties. Record production was in 1981, with 27.2 million cwt. harvested. The highest yield was 8,370 pounds per acre in 2012.

Several different types of rice milling procedures are in use today. The simplest and oldest method produces a product known as regular milled white rice, the most prevalent on the market currently. During this process, rice grains are subjected to additional cleaning to remove chaff, dust, foreign seed, etc., and then husks are removed from the grains. This results in a product that is the whole unpolished grain of rice with only the outer hull and a small amount of bran removed. This product is called brown rice and is sometimes sold without further treatment other than grading. It has a delightful nutlike flavor and a slightly chewy texture.

When additional layers of the bran are removed, the rice becomes white in color and begins to appear as it is normally recognized at retail level. The removal of the bran layer from the grain is performed in a number of steps using two or three types of machines. After the bran is removed, the product is ready for classification as to size. Rice is more valuable if the grains are not broken. In many cases, additional vitamins are added to the grains to produce what is called “enriched rice.”

Another process may be used in rice milling to produce a product called parboiled rice. In this process, the rice is subjected to a combination of steam and pressure prior to the time it is milled in the manner described above. This process gelatinizes the starch in the grain, the treatment aiding in the retention of much of the natural vitamin and mineral content. After cooking, parboiled rice tends to be fluffy, more separate, and plump.

Still another type of rice is precooked rice, which is actually milled rice that, after milling, has been cooked. Then the moisture is removed through a dehydration process. Precooked rice requires a minimum of preparation time since it needs merely to have the moisture restored to it.

The U.S. produces only a small part of the world’s total rice, but it is one of the leading exporters. American rice is popular abroad and is exported to more than 100 foreign countries.

Wheat for grain is one of the state’s most valuable cash crops. In 2018, wheat was exceeded in value by cotton, hay, and corn. Wheat pastures also provide considerable winter forage for cattle that is reflected in value of livestock produced.

Wheat was first grown commercially in Texas near Sherman about 1833. The acreage expanded greatly in North Central Texas after 1850 because of rapid settlement of the state and introduction of the well adapted Mediterranean strain of wheat. A major family flour industry was developed in the Fort Worth/Dallas/ Sherman area between 1875 and 1900. Now, around half of the state acreage is planted on the High Plains and about a third of it is irrigated.

Most of the Texas wheat acreage is of the hard red winter class. Because of the development of varieties with improved disease resistance and the use of wheat for winter pasture, there has been a sizable expansion of acreage in Central and South Texas.

Interest in corn production throughout the state has increased since the 1970s as yields improved with new varieties. Once the principal grain crop, corn acreage declined as plantings of grain sorghum increased. Only 500,000 acres were harvested annually until the mid- 1970s, when new hybrids were developed. Harvested acreage was 1.8 million in 2018; 2.2 million in 2017; and 2.6 million in 2016. Yields for the corresponding years were 108, 140, and 127 bushels per acre, respectively.

Most of the acreage and yield increase has occurred in Central and South Texas. In 2018, corn ranked third in value among the state’s crops. It was valued at $774.9 million in 2018; $1.2 billion in 2017; and $1.2 billion in 2016. The grain is largely used for livestock feed, but other important uses are in ethanol and food products.

Hay, Silage, and Other Forage Crops

A large proportion of Texas’ agricultural land is devoted to forage crop production. This acreage produces forage needs and provides essentially the total feed requirements for most of the state’s large domestic livestock population as well as game animals. Approximately 87.9 million acres of pasture and rangeland, which are primarily in the western half of Texas, provide grazing for beef cattle, sheep, goats, horses, and game animals. An additional 8.3 million acres are devoted to cropland used only for pasture or grazing. The average annual acreage of forage land used for hay, silage, and other forms of machine harvested forage is around 5 million acres.

All hay accounts for a large amount of this production with some corn and sorghum silage being produced. The most important hay crops are annual and perennial grasses and alfalfa. Production in 2018 totaled 8.4 million tons of hay from 4.7 million harvested acres at a yield of 1.8 tons per acre. Value of hay was $1.1 billion, or $137 per ton.

An additional sizable acreage of annual forage crops is grazed, as well as much of the small grain acreage. Alfalfa, sweet corn, vetch, arrowleaf clover, grasses, and other forage plants also provide income as seed crops.