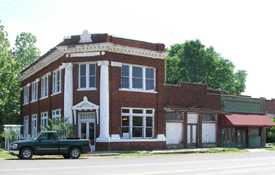 The library and Museum that serves the city of Beckville, in Panola County, Texas Photograph by Barclay Gibson via TexasEscapes.com.

Beckville, at the junction of State Highway 149 and Farm roads 124 and 959, eight miles northwest of Carthage in northwestern Panola County, was established a mile east of the present site and named for Matthew W. Beck, who settled in the area around 1850. A local post office opened in 1857, and by 1885 the community had two churches, two steam gristmills, three general stores, a hotel, a blacksmith, and an estimated population of seventy-five. When the Texas, Sabine Valley and Northwestern Railway was built through the county in 1886, the townspeople demanded such high prices for their property that railroad officials bypassed it a mile to the south. Joe Biggs, who owned the land in that area, sold it to the railroad and laid out a new townsite. Within a short time most of the businesses were moved to the railroad and the old Beckville was completely deserted. The first Beckville school was built in 1889, and by 1897 the town had a three-teacher school with a total enrollment of 151. In 1914 the population reached 750. In 1917 a fire destroyed a part of the business district. Beckville was incorporated by 1929, when it had a population of nearly 880. A drought in 1927 and the onset of the Great Depression, however, halted the town's growth. By the mid-1930s the population had dropped to 453, and many businesses were closed. After World War II the population remained steady; in 1965 Beckville had a population of 423 and twelve businesses. In 1990 the population was 783, and in the early 1990s the community had fifteen rated businesses. In 2000 the population was 847 and in 2016 it was estimated at 858.

Beckville at a Glance

Beckville is part of or belongs to the following places.

Beckville is classified as a Town

Photos of Beckville and surrounding areas

The library and Museum that serves the city of Beckville, in Panola County, Texas Photograph by Barclay Gibson via TexasEscapes.com.

Beckville by the Numbers