In 1801, the Spanish government of Mexico became aware of an attempted insurrection by Phillip Nolan to take over the Texas region and quickly realized the economic potential that Texas had. 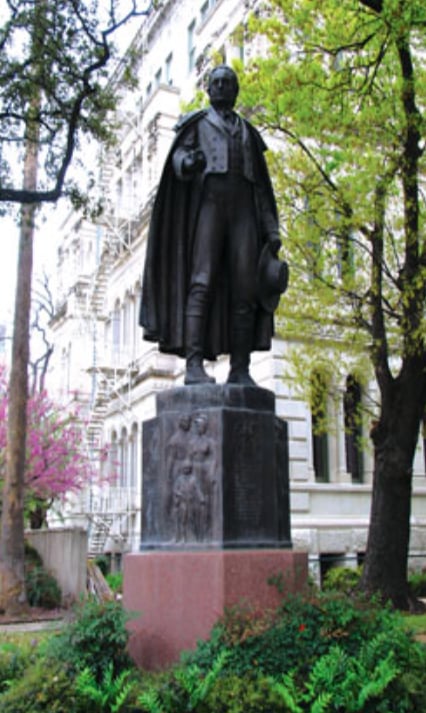 A statue of Moses Austin stands in front of city hall in San Antonio. Photo by Robert Plocheck.

Around 1800, Anglo-Americans began to probe the Spanish frontier. Some settled in East Texas and others crossed the Red River and were tolerated by authorities.

Others, however, were thought to have nefarious designs. Philip Nolan was the first of the American filibusters to test Spanish resolve. Several times he entered Texas to capture wild horses to sell in the United States.

But in 1801, the Spanish perceived an attempted insurrection by Nolan and his followers. He was killed in a battle near present-day Waco, and his company was taken captive to work in the mines in northern Mexico.

Spanish officials were beginning to realize that the economic potential of Texas must be developed if the Anglo-Americans were to be neutralized. But Spain’s centuries-long role in the history of Texas was almost over.

Resistance to Spanish rule had developed in the New World colonies. Liberal ideas from the American and French revolutions had grown popular, despite the crown’s attempts to prevent their dissemination.

In Spain, three sovereigns — Charles IV, Napoleon’s brother Joseph Bonaparte, and Ferdinand VII — claimed the throne, often issuing different edicts simultaneously. Since the time of Philip II, Spain had been a tightly centralized monarchy with the crown making most decisions. Now, chaos reigned in the colonies.

As Spain’s grip on the New World slipped between 1790 and 1820, Texas was almost forgotten, an internal province of little importance. Colonization was ignored; the Spanish government had larger problems in Europe and in Mexico.

Spain’s mercantile economic policy penalized colonists in the area, charging them high prices for trade goods and paying low prices for products sent to markets in the interior of New Spain. As a result, settlers from central Mexico had no incentives to come to Texas. Indeed, men of ambition in the province often prospered by turning to illegal trade with Louisiana or to smuggling. On the positive side, however, Indians of the province had been mollified through annual gifts and by developing a dependence on Spain for trade goods.

Ranching flourished. In 1795, a census found 69 families living on 45 ranches in the San Antonio area. A census in 1803 indicated that there were 100,000 head of cattle in Texas. But aside from a few additional families in Nacogdoches and La Bahía (near present-day Goliad), the province was thinly populated.

The largest group of early immigrants from the United States was not Anglo-American, but American Indian.

As early as 1818, Cherokees of the southeastern United States came to Texas, settling north of Nacogdoches on lands between the Trinity and Sabine rivers. The Cherokees had been among the first U.S. Indians to accept the federal government’s offers of resettlement. As American pioneers entered the newly acquired lands of Georgia, Alabama and other areas of the Southeast, the Indians were systematically removed, through legal means or otherwise.

Some of the displaced groups settled on land provided in Arkansas Territory, but others, such as the Cherokees, came to Texas. These Cherokees were among the “Five Civilized Tribes” that had adopted agriculture and many Anglo customs in an unsuccessful attempt to get along with their new neighbors.

Alabama and Coushatta tribes had exercised squatters’ rights in present-day Sabine County in the early 1800s, and soon after the Cherokees arrived, groups of Shawnee, Delaware and Kickapoo Indians came from the United States.

A second wave of Anglo immigrants began to arrive in Texas, larger than the first and of a different character. These Anglos were not so interested in agricultural opportunities as in other schemes to quickly recoup their fortunes.

Spain recognized the danger represented by the unregulated colonization by Americans. The Spanish Cortes’ colonization law of 1813 attempted to build a buffer between the eastern frontier and northern Mexico. Special permission was required for Americans to settle within 52 miles of the international boundary, although this prohibition often was ignored.

As initially envisioned, Americans would be allowed to settle the interior of Texas. Colonists from Europe and Mexico would be placed along the eastern frontier to limit contact between the Americans and the United States. Spanish officials felt that the Americans already in Texas illegally would be stable if given a stake in the province through land ownership.

Moses Austin, a former Spanish subject in the vast Louisiana Territory, applied for the first empresario grant from the Spanish government. With the intercession of Baron de Bastrop, a friend of Austin’s from Missouri Territory, the request was approved in January 1821.

Austin agreed to settle 300 families on land bounded by the Brazos and Colorado rivers on the east and west, by El Camino Real (the old military road running to Nacogdoches, click for map and article) on the north, and by the Gulf Coast.

But Austin died in June 1821, leaving the work to his son, Stephen F. Austin. Problems began as soon as the first authorized colonists arrived in Texas the following December when it was learned that Mexico had gained independence from Spain.

Mexico’s war for independence, 1810–1821, was savage and bloody in the interior provinces, and Texas suffered as well.

In early 1812, Mexican revolutionary José Bernardo Gutiérrez de Lara traveled to Natchitoches, La., where, with the help of U.S. agents, an expedition was organized. Augustus W. Magee, a West Point graduate, commanded the troop, which entered Texas in August 1812. This “Republican Army of the North” easily took Nacogdoches, where it gathered recruits.

After withstanding a siege at La Bahía, the army took San Antonio and proclaimed the First Republic of Texas in April 1813. A few months later, the republican forces were bloodily subdued at the Battle of Medina River.

Royalist Gen. Joaquín de Arredondo executed a staggering number of more than 300 republicans, including some Americans, at San Antonio, and a young lieutenant, Antonio López de Santa Anna, was recognized for valor under fire.

When the war finally ended in Mexico in 1821, little more had been achieved than separation from Spain.

Sensing that liberal reforms in Spain would reduce the authority of royalists in the New World, Mexican conservatives had led the revolt against the mother country. They also achieved early victories in the debate over the form of government the newly independent Mexico should adopt.

An independent Mexico was torn between advocates of centralist and federalist forms of government.

The former royalists won the opening debates, settling Emperor Agustín de Iturbide on the new Mexican throne. But he was overthrown and the Constitution of 1824, a federalist document, was adopted.

The Mexican election of 1828 was a turning point in the history of the country when the legally elected administration of Manuel Gómez Pedraza was overthrown by supporters of Vicente Guerrero, who in turn was ousted by his own vice president Anastasio Bustamante. Mexico’s most chaotic political period followed. Between 1833 and 1855, the Mexican presidency changed hands 36 times.

Mexico’s land policy, like Spain’s, differed from the U.S. approach. Whereas the United States sold land directly to settlers or to speculators who dealt with the pioneers, the Mexicans retained tight control of the property transfer until predetermined agreements for development were fulfilled.

But a 4,428-acre sitio — a square league — and a 177-acre labor could be obtained for only surveying costs and administrative fees as low as $50. The empresario was rewarded with grants of large tracts of land, but only when he fulfilled his quota of families to be brought to the colonies.

Considering the prices the U.S. government charged, Texas’ land was indeed a bargain and a major attraction to those Americans looking for a new start.

More than 25 empresarios were commissioned to settle colonists. Empresarios included Green DeWitt and Martín de León, who in 1824 founded the city of Guadalupe Victoria (present-day Victoria).

By 1830, Texas boasted an estimated population of 15,000, with Anglo-Americans outnumbering Hispanics by a margin of four to one.

Stephen F. Austin was easily the most successful empresario. After his initial success, Austin was authorized in 1825 to bring 900 more families to Texas, and in 1831, he and his partner, Samuel Williams, received another concession to bring 800 Mexican and European families. Through Austin’s efforts, 1,540 land titles were issued to settlers.

In the early years of colonization, the settlers busied themselves clearing land, planting crops, building homes and fending off Indian attacks. Many were successful in establishing a subsistence economy.

One weakness of the Mexican colonial policy was that it did not provide the factors for a market economy. Although towns were established, credit, banks and good roads were not provided by the government.

Ports were established at Galveston and Matagorda bays after Mexican independence, but the colonists felt they needed more, particularly one at the mouth of the Brazos. And foreign ships were barred from coastwise trade, which posed a particular hardship because Mexico had few merchant ships.

To settle in Texas, pioneers had to become Mexican citizens and to embrace Roman Catholicism. Most of the Americans were Protestants, if they adhered to any religion, and they were fiercely defensive of the right to religious freedom enjoyed in the United States.

Although no more than one-fourth of the Americans ever swore allegiance to the Catholic Church, the requirement was a long-standing irritation.

Slavery, too, was a point of contention. Mexico prohibited the introduction of slavery after December 1827. Nevertheless, several efforts were made to evade the government policy. Austin got the state tlegislature to recognize labor contracts under which slaves were technically free but bound themselves to their masters for life. Often entire families were covered by a single contract. While many early Anglo colonists were not slaveholders, they were Southerners, and the ownership of slaves was a cultural institution that they supported. The problem was never settled during Texas’ colonial period despite the tensions it generated.

A statue of Moses Austin stands in front of city hall in San Antonio. Photo by Robert Plocheck. 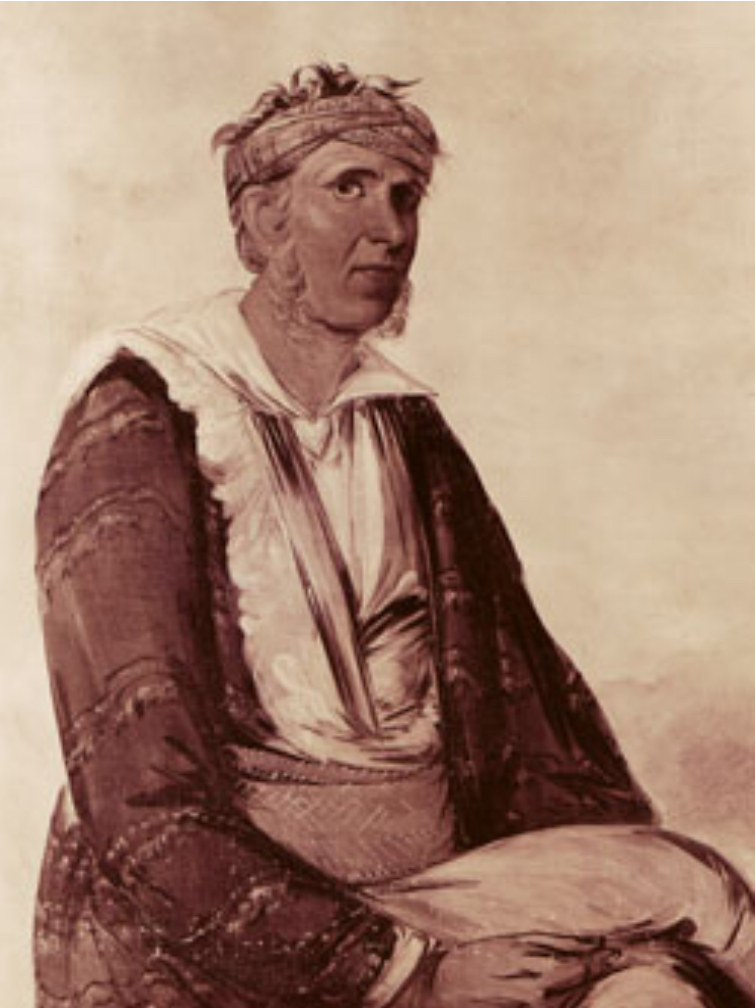 Col-lee, chief of a band of Cherokee

Col-lee, chief of a band of Cherokee. Drawing from the Smithsonian Institution.